CATS,DOGS,FISHES AND FROGS
(a Freudian thing) 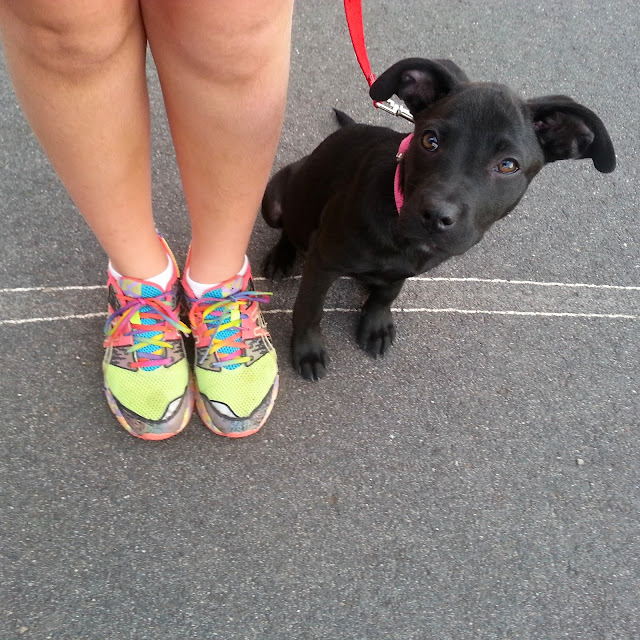 Somehow and somewhere along the line, it seems my subconscious decided that no home would be complete without a menagerie of animals to compliment the chaos already existing. 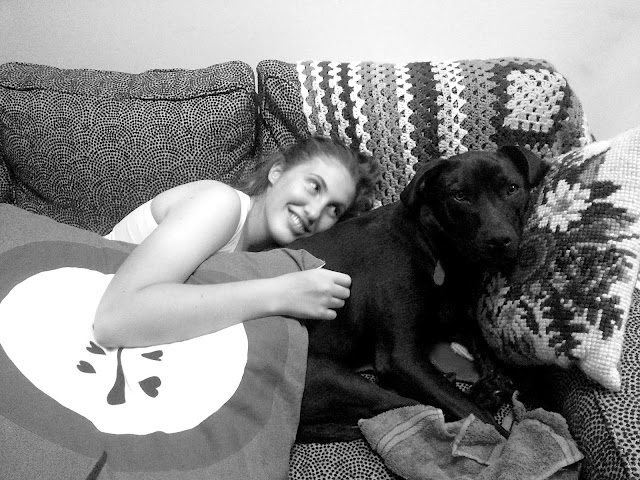 I am self aware enough to realise that the reason this happened is most likely due to the little streak of rebelliousness towards my parents (as lovely as they are). 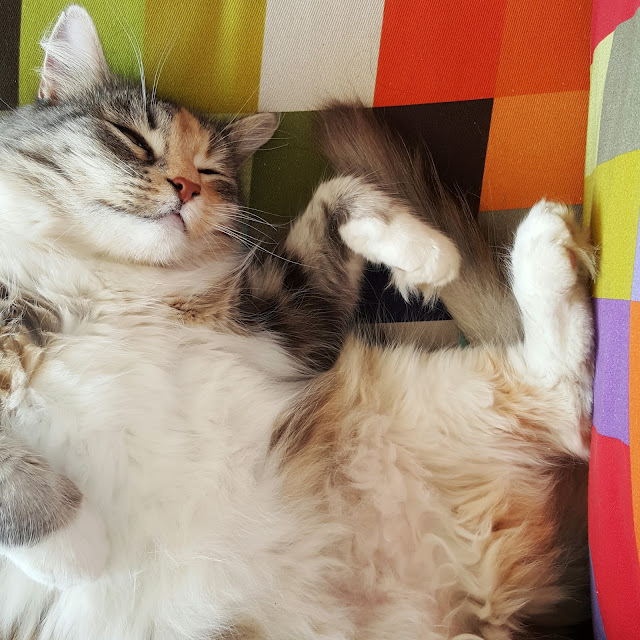 When I was a kid my family travelled a lot. (Actually they travel even more now) so pets just were not really viable. The last pet I had was a cat, Snowy, who went to the RSPCA for a very extended holiday when my dad booked our tickets for a few months travelling the USA. Bye Bye Snowy, Hello America. 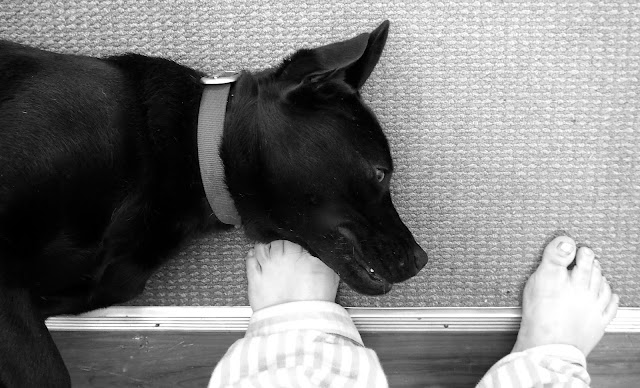 So now in my 40's I find myself with a dog, 2 cats, 9 fish and a green tree frog. There have also been birds, yabbies, pet snails, crickets, stick insects, woodlice, praying mantis, tadpoles and silk worms at various times. We also had another dog. But that is still too sad for me to think about. 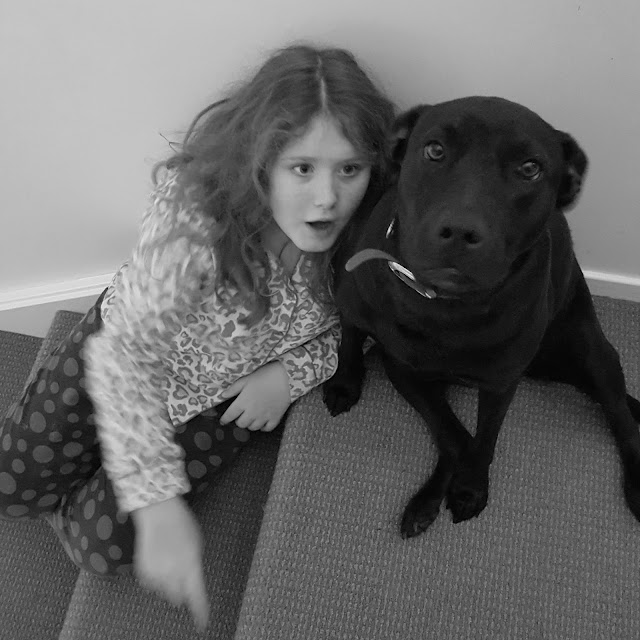 Each of our pets has its own crazy backstory. Like Olive Pip the black Lab/Staffy that we fell in love with at the RSPCA next to a slag heap in Broken Hill. We ended driving across the state to get her, and only after hubby and I had a heated trailer park white trash kind of argument, in the caravan park, when I told him that regardless of the fact we were many many many hundreds of kilometres from home, and about to go camping out in the desert for a week, I WOULD BE HAVING THAT PUPPY. Needless to say, what's a good story without a complication or two?( And I got the puppy) 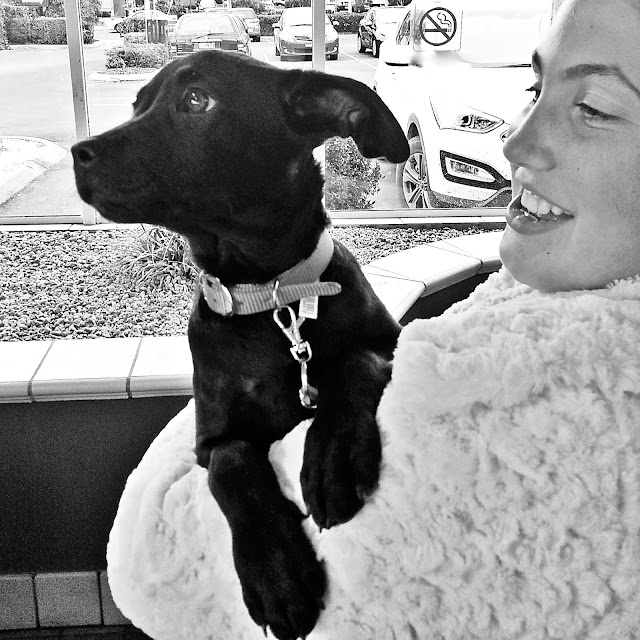 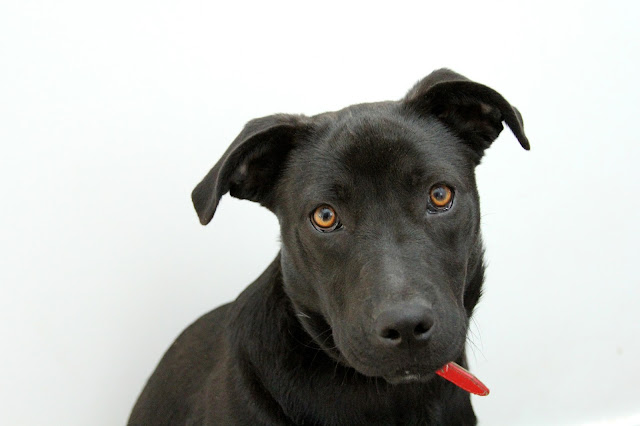 Then there are our 2 cats, girl sisters Fizzy and Lolly. We had cats previous to these two, Mummycat (who came free with a house), Febo  and Minnie. Febo was a beautiful cat, but we had to put him down when he had a tumour, so Minnie was the replacement cat. We  all adored that kitten — and when she was hit by a car out the front of our house (another cat died at the scene too-it was horrible)when still little, we grieved and cried and generally felt just bereft. We stayed pet free for a bit after that. 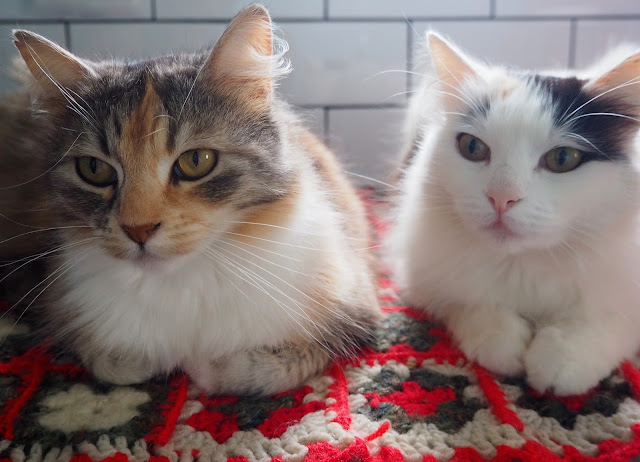 Eventually though, the idea of getting another cat became a topic... so off to the vets I went.

And there in the waiting room was a fluff ball, needing a home. But the vet nurse said I should look at another kitten, the sister of the fluff ball, to see if I thought I might like her better. My gosh, she carried out this huge white fluffy blob, and my heart melted. How could I choose? How could I separate these sisters? So I took home not one kitten but two. 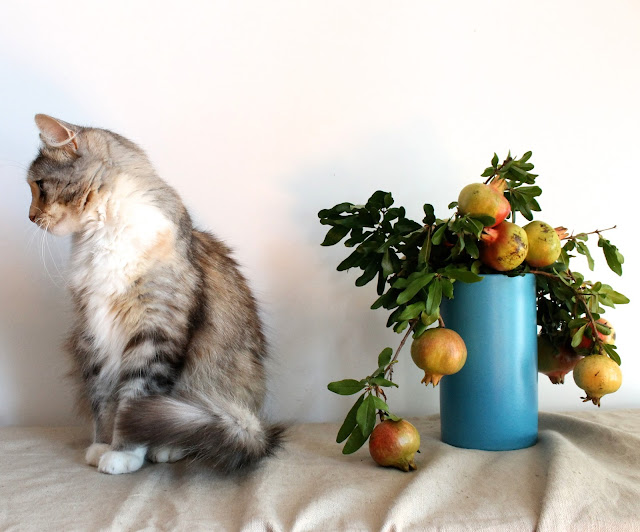 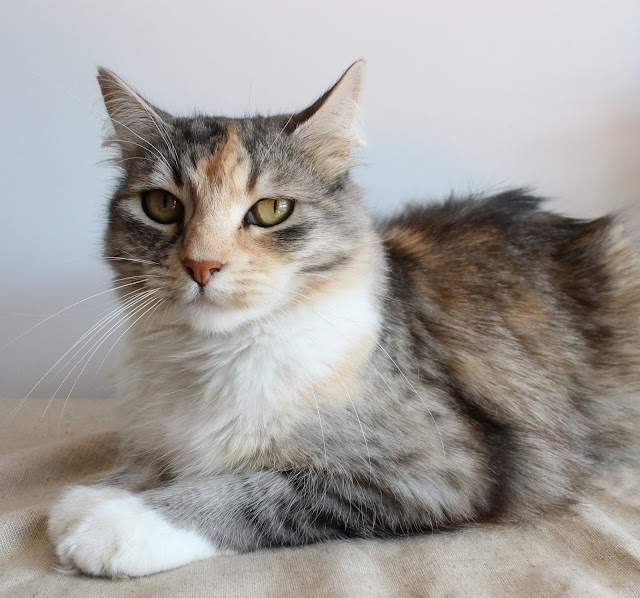 5 years on, these felines are so different in temperament and personality, but both are lovely.

Fizzy features in lots of my photos, because she sleeps on my artwork, drinks watercolour water, and is never far from me. Lolly is more the independent type, a free spirit. 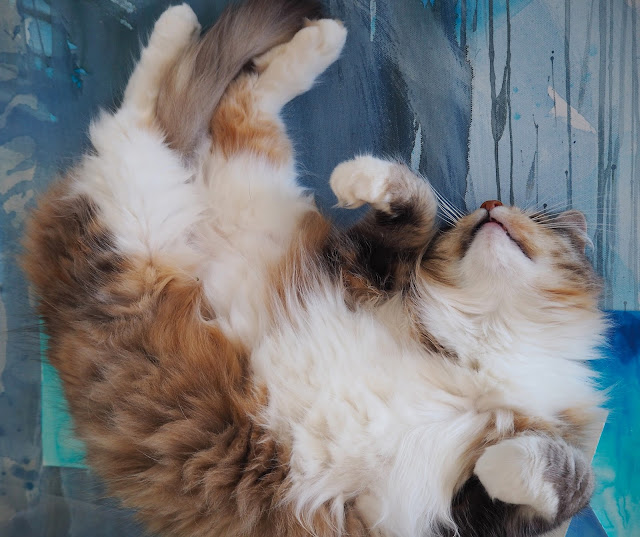 Which brings us to Froggy. Or also called BOGGY, HERBERT, and LILYPAD. She started as Herbert, we realised she was a girl (she never croaks and boy frogs do) became Lilypad, but is always called Froggy, which gets shortened to boggy. Don't ask. 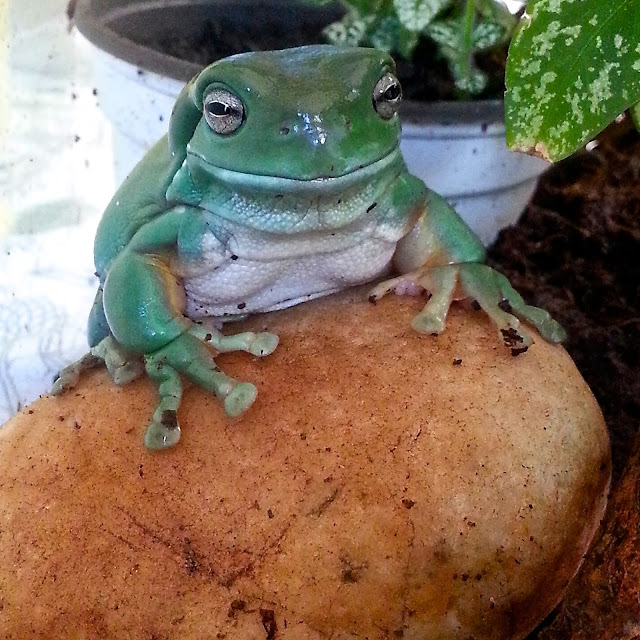 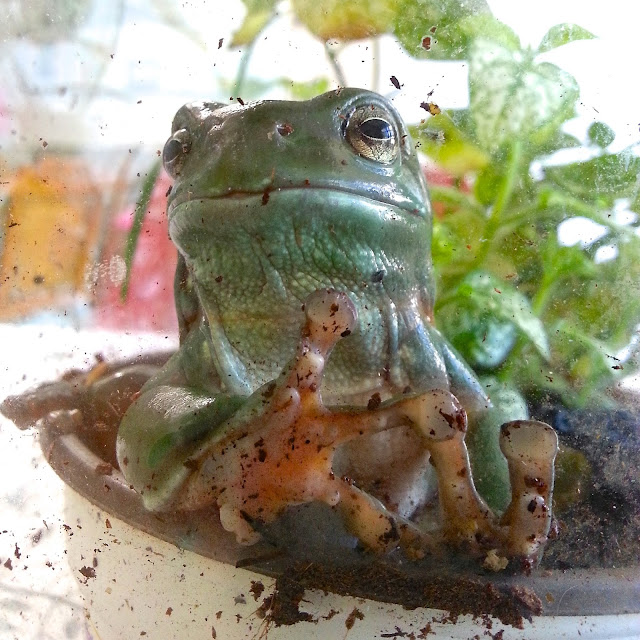 
I save saved froggy from the  toilets at a school I taught at, where squealing girls were covering her in soap trying to flush her down the loo. I had  wanted a green tree frog for a long time, because I painted them and drew them a lot when I did illustration at Uni. Dreams can come true.


Many years on, and my stunning litoria cerulean is well fed with crickets, bugs, cockroaches and moths I catch with my bare hands to give her. Yep, I can often be found in my nightie running around the verandah catching moths and cockroaches at night. The neighbours must think me nuts. I love that frog. 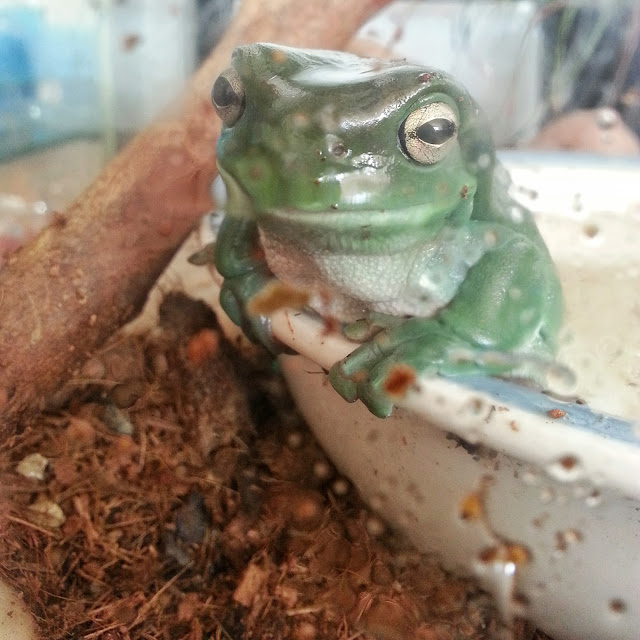 The fish are okay, not quite as entertaining, but very pretty. Walter Mitty was the first, but now he has a harem of lovely ladies. The other day one of them went to fishy heaven, and Miss 9 and I had a full goodbye service, with flowers and solemn words, tears and reminiscing about good times.

There have been quite a few deaths it is true, and sad good byes. We have lots of pets fertilising our backyard. And there is the endless feeding, kitty litter duties, dog walking, poo patrols, tank cleaning, and general upkeep. And the cost!

But boy do our animals make us laugh. The anecdotes, the memories and stories of the things they do, the noises they make, the antics they display, the knowledge we have gained, the affection they give us... all this and more. Sometimes the only thing that can make the surly 16 year old man child smile are the pets. They are worth it just for that.

So even though the reason I have succumbed to pet proliferation may be a little Freudian, regardless of why we have them, I am so glad we do. They enrich our lives so much. Viva La Pets! 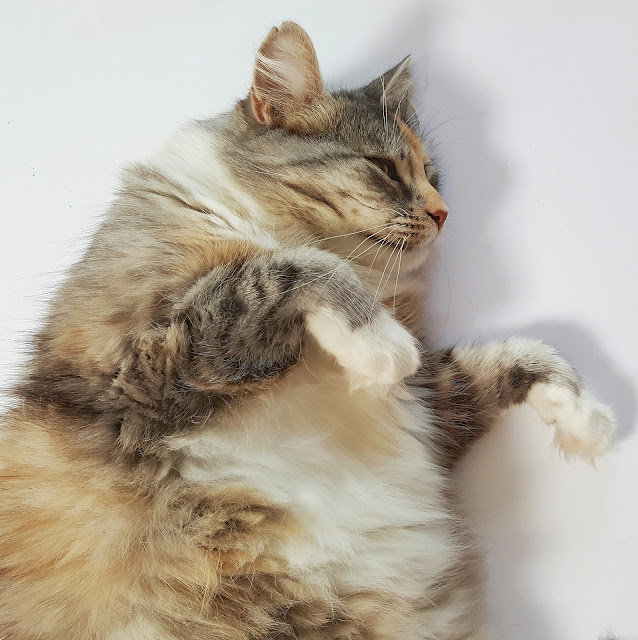 (Having said that, my hubby has said he will divorce me if I bring home any other animals. Not game to test that one! And so NO! you CANNOT have a rabbit, horse, guinea pig or axollotyl) 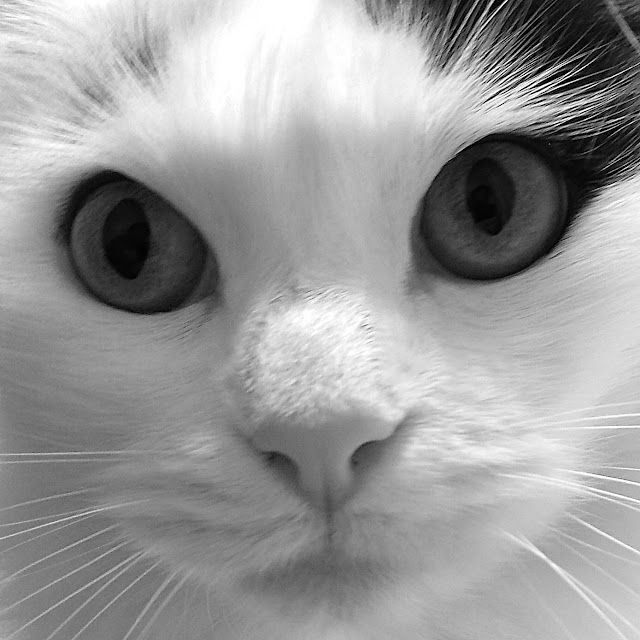 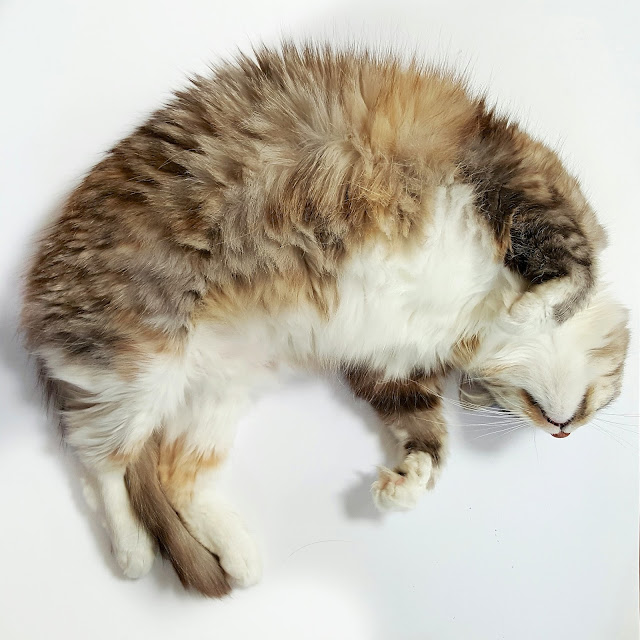 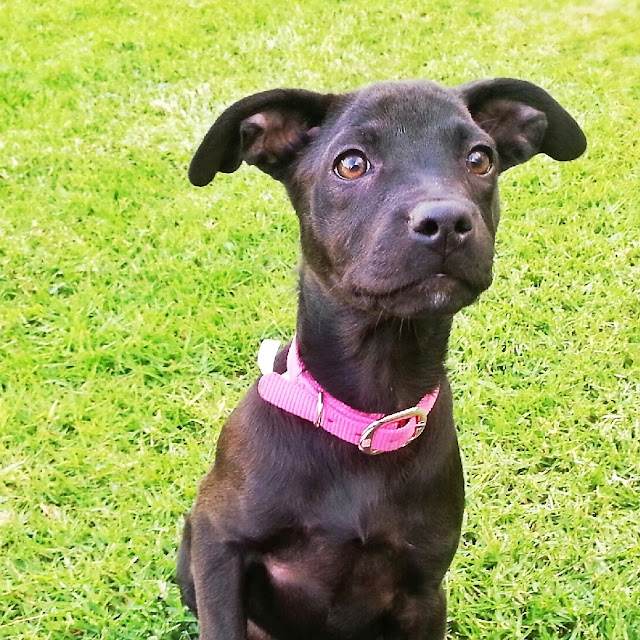 at 08:00 No comments:
Email ThisBlogThis!Share to TwitterShare to FacebookShare to Pinterest
Newer Posts Older Posts Home
Subscribe to: Posts (Atom)