THE CHRISTMAS TREE of COLLECTED RANDOM STUFF - and how and why i made it... 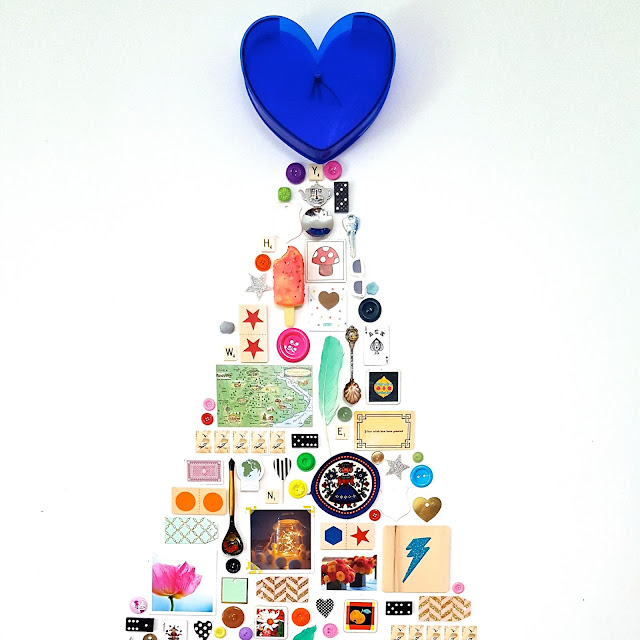 WOWSERS! How fast has December landed? How fast is Christmas coming? I guess because of all the THINGS that have happened in the last 6 weeks or so(knee operation/gastro etc)December caught me really off guard. But there was at least ONE thing I had done to create a bit of Christmas cheer in the house, one thing that reminds us it is the Silly Season. My Christmas tree of random  collected stuff! So how did it happen?

Miss 9 was home sick, and it was REALLY hot. Luckily the zircon was working a treat, so the lounge room was nice and chilly. Poor Miss 9 was vomitting lots, and floating in and out of sleep, and I really did not want to leave her alone. Which meant ducking down to the studio to paint was not an option.

I had finished a novel, done the washing, and faffed in the kitchen. What to do? I needed to stay in the room with her, in the cool, whatever it was. I thought maybe I should drag out the Chrissy tree... but Miss 9 was not keen on me doing it while she was sick, because she wanted to 'help'. Hmmm.

So I was going through our mail, sitting reading the postcards and lovely snail mail that had arrived for me amongst the bills, sipping on an iced coffee. Little snores were coming from the sofa, letting me know Miss 9 was resting.

My brain started thinking about how I had so many nice things sent to me in the mail, it seemed a shame to just put them on the fridge. I remembered how I used to Blutac them up, like wallpaper, when I was younger and lived in student rental digs. I had a whole wall of postcards from all over the place. It was supercool.

In the stack of catalogues also in the letterbox, there were adds for Chrissy trees. LIGHTBULB MOMENT! Somehow my brain went...tree-postcards-buttons-stuff-THINK THINK THINK.BOOM!

In a flash I was collecting stuff, random things, from my studio, from my vignetting stash of props, laying them out on the table.

So how to do this?

Lucky me, I have a Lovestar heart wall vase (my Chrissy present last year) perfect for the top of a tree. I used the nail, already there, to tie string around and stretch it out, to use as a guideline for the edge of the tree and get the shape just right. 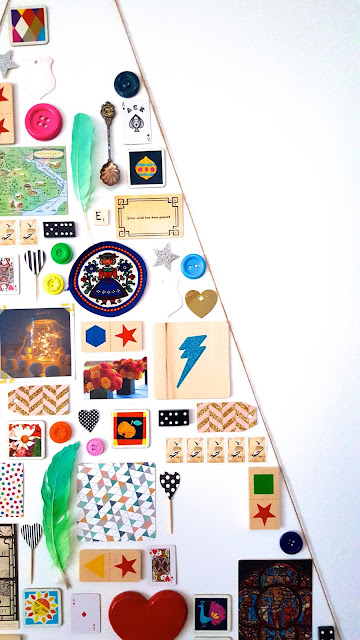 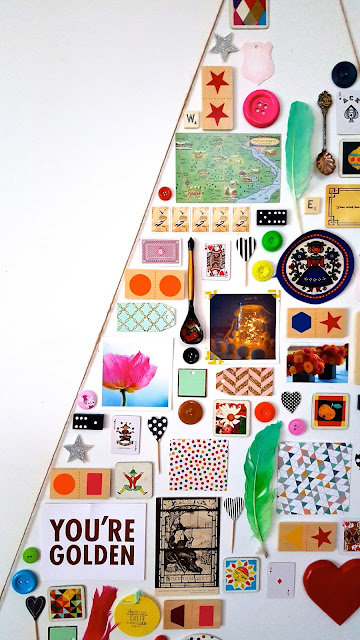 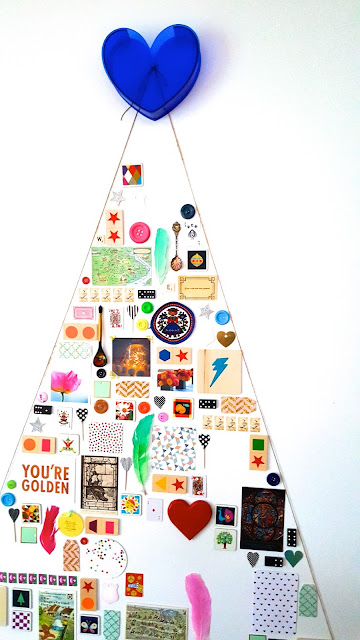 the string was used as a guideline

I used Blutac to keep the string in place, and just started sticking on STUFF. Stuff I love, stuff collected, stuff waiting to get a chance to have a little limelight. I knew it would need stuff in it with a bit of repetition to create some harmony, so I looked at what I had lots of. Buttons, keys, playing cards, love hearts, dominoes, snap cards... 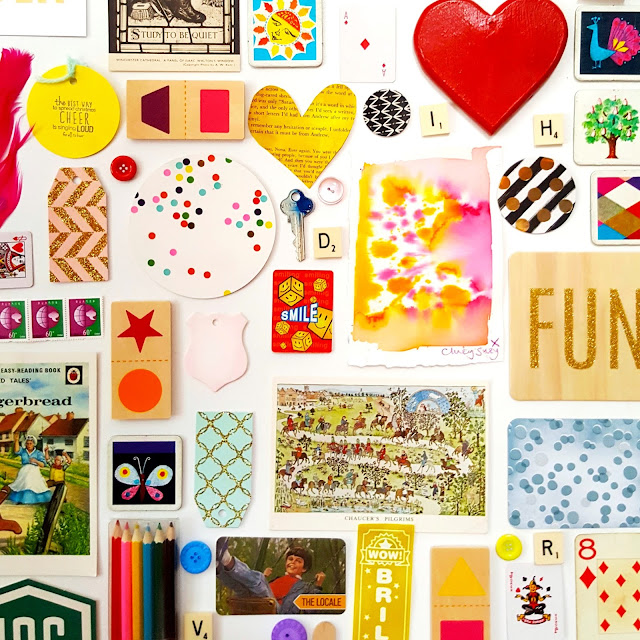 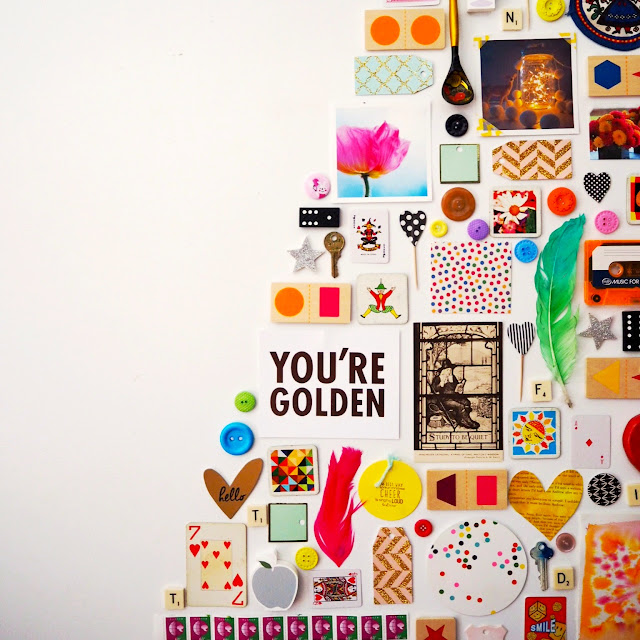 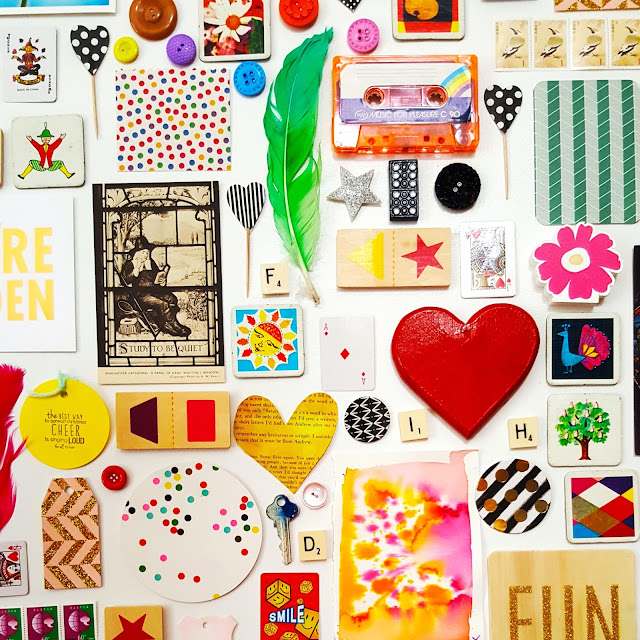 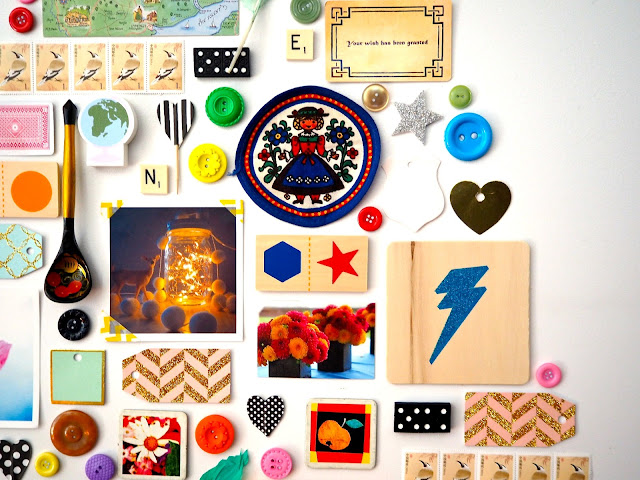 Then there was the stash of quirky stuff for fun. Feathers, spoons, take way wooden forks, swing tags, gift tags,cassette tapes, pencils, toy glasses, an ice cream magnet, painted paper doilies... you know, random things! But most lovely, some of the fabulous snail mail I have received from people all over the place. People who are friends online, and in real life. Special bits and pieces, special treasures. 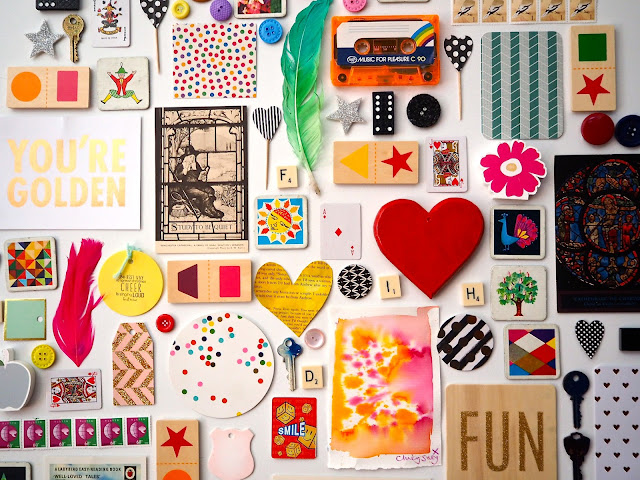 It took a few packets of Blutac, and luckily I had loads of it stashed away, and a hubby who did not complain when I asked for more when he was ducking down to the shops for essentials. Nice man, a real keeper.

So there I am, sticking stuff to the wall, rolling up balls of Blutac, my family not batting an eyelid — just mum doing more weird stuff.

Over the next few days, I tweaked and straightened crooked things, but I was not too fussy, definitely not a perfectionist. It was all done by eye, nothing planned terribly or measured. The tree was also added to over a few days, and I used buttons and keys and scrabble tiles to fill in gaps. And if I made a mistake, I just pulled it off and try somewhere or something else. Easy peasy lemon squeezey!

Seriously, I think ANYONE could do this! Just using whatever special pieces that you love, meaningful to YOU. Just have lots of Blutac, patience, and do not take it too seriously. 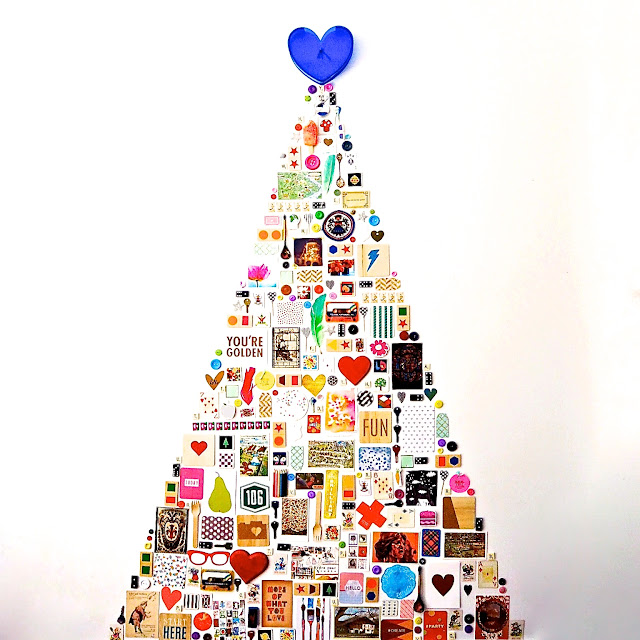 at 18:34 No comments:
Email ThisBlogThis!Share to TwitterShare to FacebookShare to Pinterest 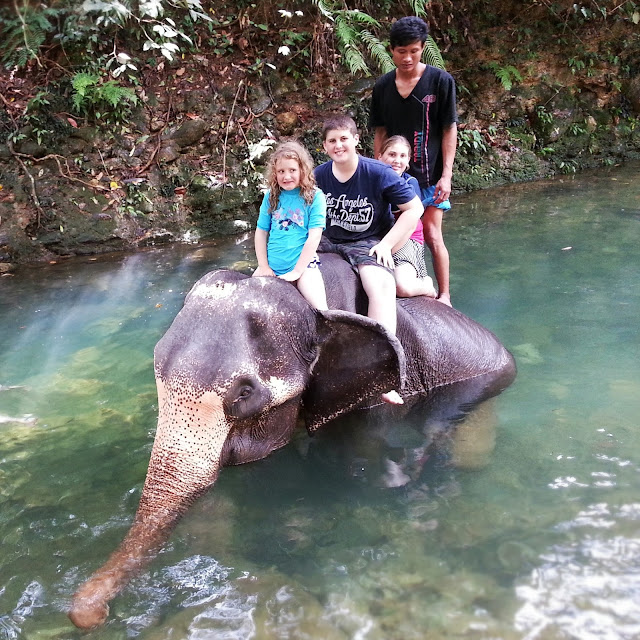 HOLIDAY - a magical word, right up there with  my other fave words like SLEEP, CHEESE, DREAM and SWOON.

AND ONLY A FEW DAYS TO GO TILL WE ARE ON HOLIDAYS AGAIN!YAHOO!

We all have different ideas of what a holiday should be about. Some like mountains, some like cities, some bungy jump and seek adrenaline, some lie prostrate on beach towels and soak up the sun. Some investigate, savour the new and unfamiliar, explore, discover and seek. Some seek comfort in a familiar place, and routine. Wherever you fall on the holiday spectrum, we all love them, crave them, need them. Quite frankly, I would love take any type you offer me. 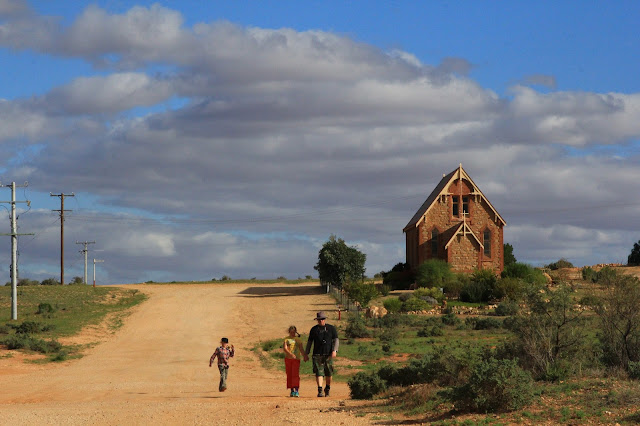 
For me, in a household of teachers and school age kids, there is a rhythm to our lives that follows a 10 week school term cycle...

Week 1 We are fresh and hopeful.

Week 3 Starting to forget we were ever on holidays, but still doing well.

Week 4 Things are getting a bit more hectic.

Week 5 Gee whizz, this is getting to be a real drag. Not fun anymore.

Week 6 Okay, jokes aside, when are the next holidays, because I am getting a bit over this.

Week 7 Everyone and everything is beginning to give me the shits, and I am quite tired.

Week 8 This family is impossible, you are all just lazy buggers, I am sick of this shit and all the school notes, having to nag all the time, and how much longer does this go on?

Week 9 Seriously, I am about to go neutron bomb crazy, and I just want to sleep and run away to join the circus, or live like a hermit in the wilds... wherever I do not need to fight about devices, homework, lunches, ballet times, school notes, answer emails or deal with the shit that tsunamis me everyday.

Week 10 Remember that I look terrible in orange, that I DO LOVE MY FAMILY, EVEN THOUGH RIGHT NOW THEY DRIVE ME BATSHIT CRAZY that this too shall pass, and we can hang on till the e n d o f the w e e k...... PLEASE

HOLIDAYS! ... and we love each other again... and all is good with the world. 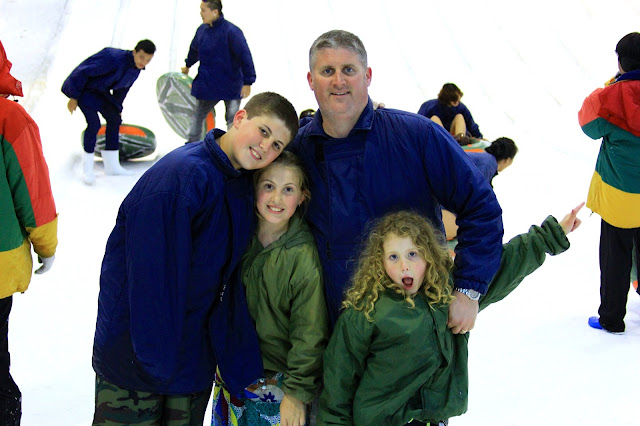 
I guess it is because life is a juggle, and I often drop all the balls, but holidays give me the chance and hope that I can scoop them back up again and start afresh.

It also gives me time to find inspiration maybe, to call on at a later date.

And the MAIN THING... is that together we as a family , we make MEMORIES, things we later talk about, laugh at, reflect on, share...The things that help glue us together. 
So when I bunged up my bloody knee, and we had to cancel a family trip to New Zealand, I was majorly bummed. Gutted. Upset. And felt tremendously guilty. I had single handedly (or kneely - bad pun) screwed it up for all 5 of us. The holiday we needed so very badly. There were tears and sobs. But there was travel insurance ( Although the bastards took 12 weeks to pay us back the policy. Nuff said. Arsehats). 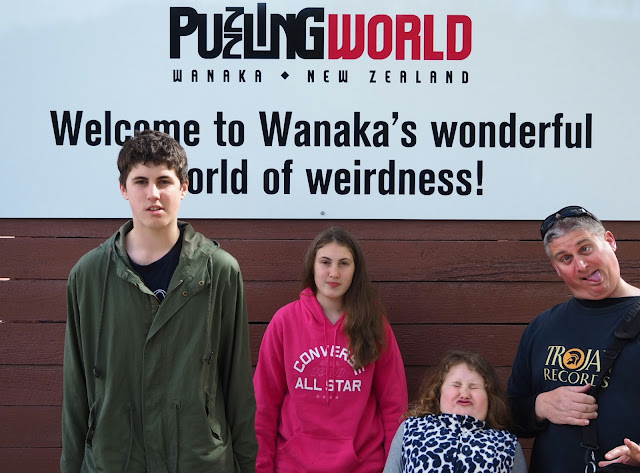 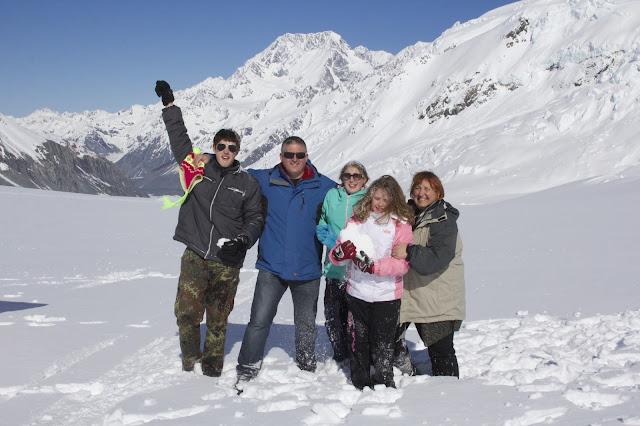 
After the initial shock, the realisation that there was no way we could get on a plane, my need for a holiday overwhelmed me and like a toddler I jumped up and down (figuratively, if not actually) and demanded we re-evaluate and re-group because I WANT A HOLIDAY!!!!

So we did. Have holiday. And we came back knackered. It was fun, it was mental, it was great. And that my friend, is where I leave this...until part 2, when I tell you about it. See you then (I hope!) x 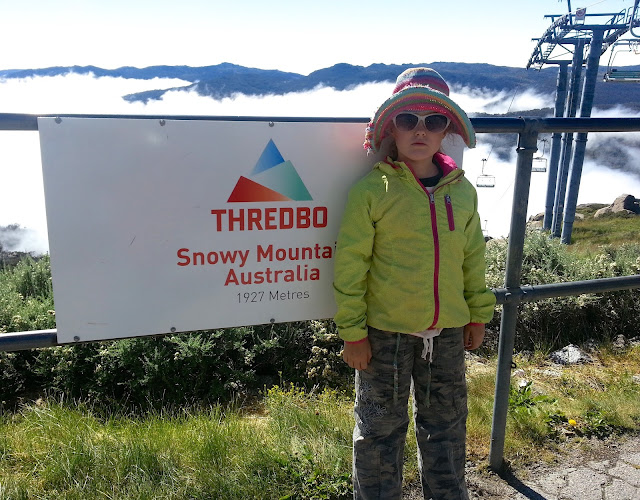 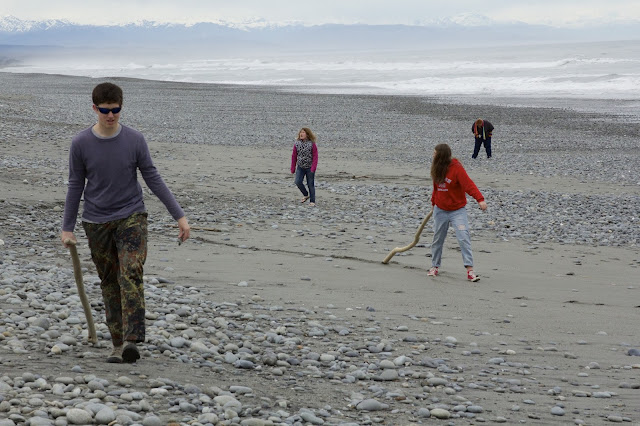 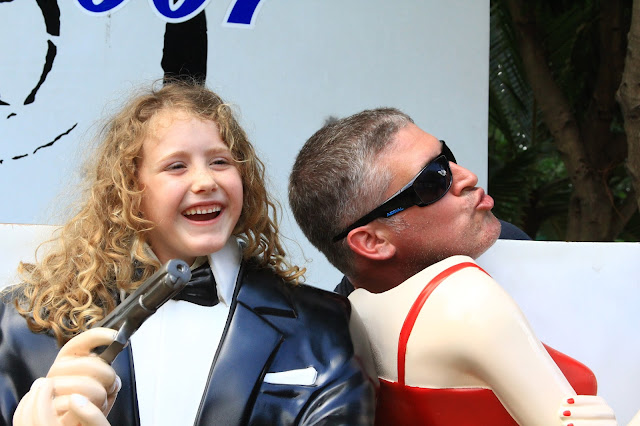 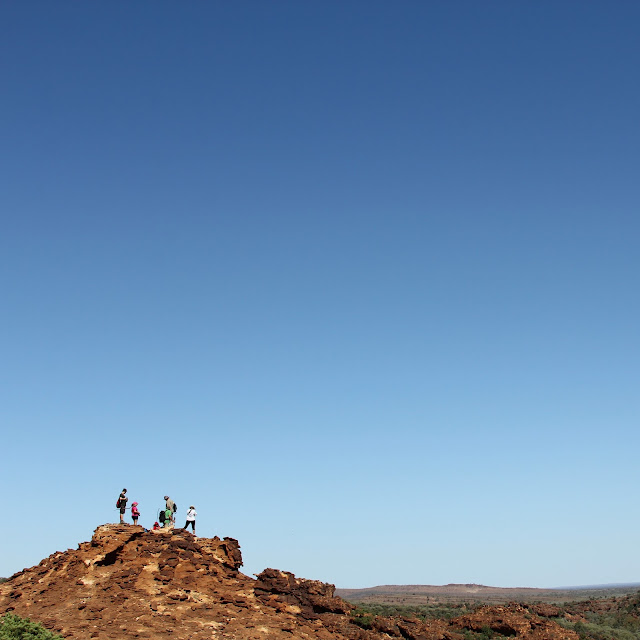 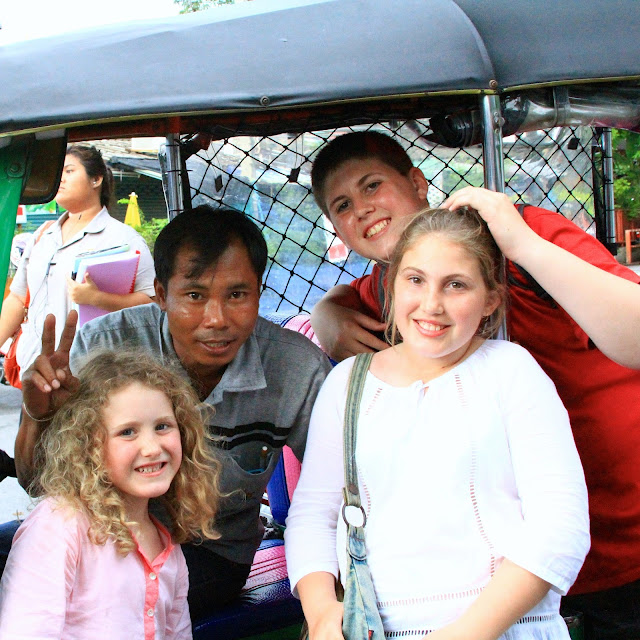 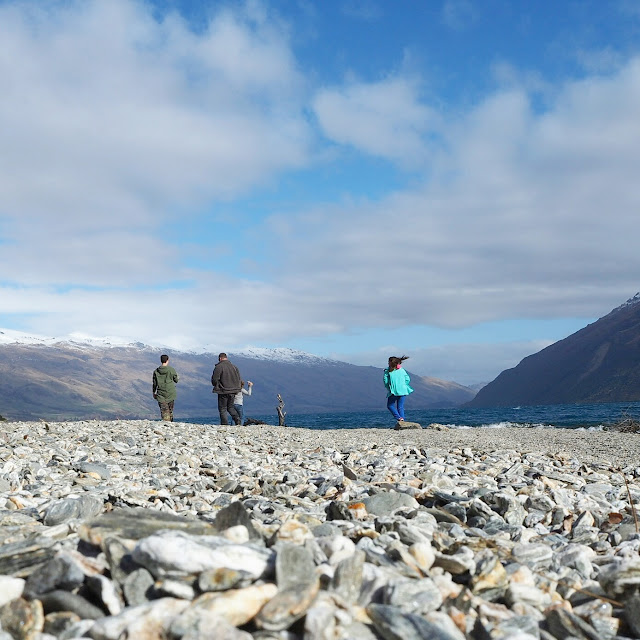 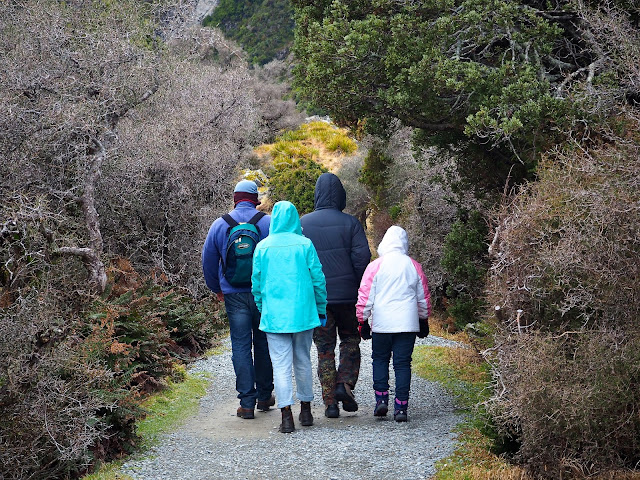