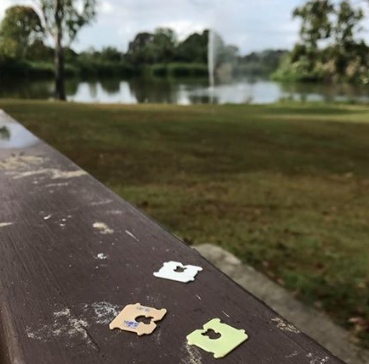 And so it goes... when you create something,  and it goes well, do you feel happy, proud, and a little bit amazed? I do. Every single time. It still makes me thrilled when I paint something or draw something that turns out the way I hoped, and sometimes even better. It is like magic. Even to me.

When I started THE BREADTAG PROJECT, I thought that the response might be befuddled amusement, and sniggers, laughter and generally questioning WHY. I was creating something that may be more fizzle than fab.

I had hoped that maybe a few people would get it, and think outside the box.

Silly fool me - I underestimated the curiosity, the generosity, the imagination and general excellence of people. Really.

Because with every passing day, I get more breadtags in the mail, in my letterbox and on my verandah. This week I had 6 huge buckets delivered from one lady, and two huge bags from someone else. My family cannot believe it. INSANE they say!

Meanwhile I have 36 packages waiting to be opened, from all over the world. They are sitting in a tub, just waiting for my family to go back to school so I can have a whole day, two or three or more, to sort them, photograph them, catalogue all the details, and write up thank you's.

And there are the stories that are coming in, the comments that are made, the photos people are sharing.  The art that people are making. It is all BRILLIANT.

Creating The Breadtag Project has been overwhelmingly lovely, and it is only the very beginning. There is so much more to do, so much to think about and organise. It is kind of terrifying, but exhilarating, feeling the power of sharing an idea and letting it fly free out there, putting it out into the universe. Feeling like you are doing something good and worthwhile.

The objectives that I wrote about in The Breadtag Manifesto are happening. YAHOO! Brilliant people.

And as I sit and sort breadtags (hundreds and thousands of them), my brain finds a peacefulness, a calm in the simple repetitive task of classifying, and my brain wanders about and thinks of new ways to make the project have meaning, stabilise, share, develop, have depth, opportunity, interest.  More ideas bloom and grow, and want to fly free.

And it feels like... a little bit of magic.

A HUGE THANK YOU TO ALL WHO HAVE CONTRIBUTED SO FAR. THIS IS YOUR PROJECT AS MUCH AS MINE.
YOU ARE AWESOME!

AND IF YOU WANT TO BE PART OF IT ALL, IF YOU HAVE BREADTAGS TO SEND:


at 22:33 No comments:
Email ThisBlogThis!Share to TwitterShare to FacebookShare to Pinterest
Newer Posts Older Posts Home
Subscribe to: Posts (Atom)