#KIDSPOT #VOICESOF2015 #FORDTHINKING The Epic and the Everyday with EVE, NEW FORD EVEREST 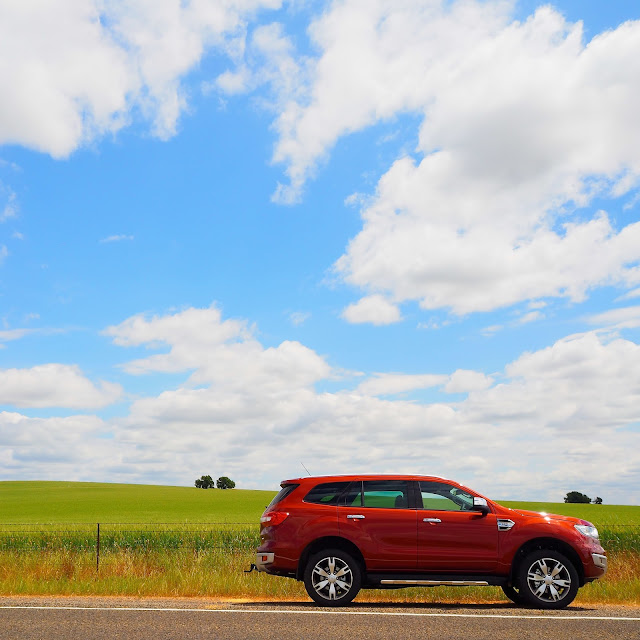 Sometimes my whole life feels EPIC. Even the everyday. Just getting out the red front door is an epic achievement some mornings. Or is it just me? 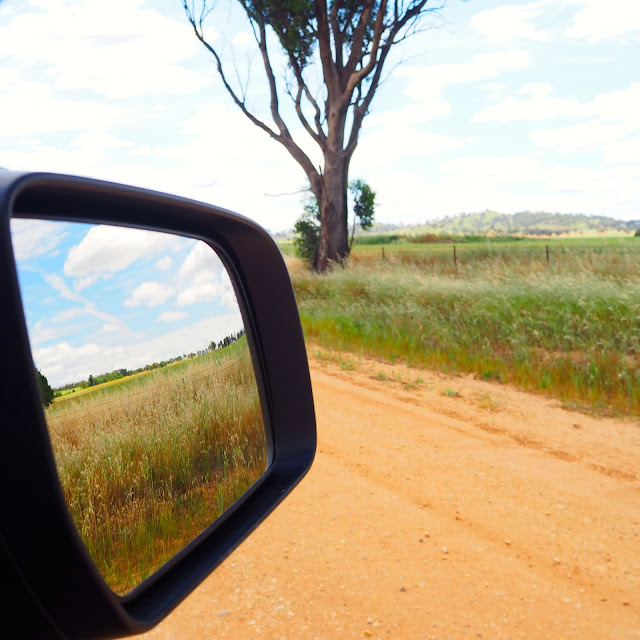 So anything at all that helps make life a little easier, is totally brilliant. Maybe some extra arms, a robot, a maid, a million bucks, coffee given intravenously and a lifetime supply of mint choc or Turkish delight... but seeing as these are mere flights of fancy, I will make do with more realistic goals. 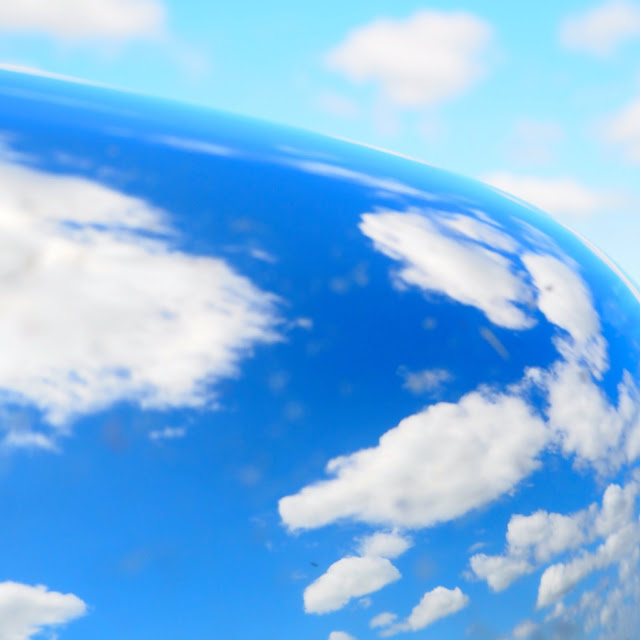 beautiful blue sky and clouds, reflected in side mirror chrome


So if I cannot have extra arms, then I guess one of the things I love about EVE, is that she has lots of magical technology built into her that makes things so much EASIER. I smile instead of curse. Like backing out of our driveway with the predictive where-you-will-go-if-you-keep-steering-like-this movie on the flat screen monitor linked to the rear camera. Like the Automatic Park Assist and the keyless entry.


Like the POWER TAILGATE, which means that with the press of a button as I hobble to the car with a zillion things hanging off me(perhaps from a stealthy trip to the shops...sshhhhhh) the back tailgate opens ALL BY ITSELF. Really. 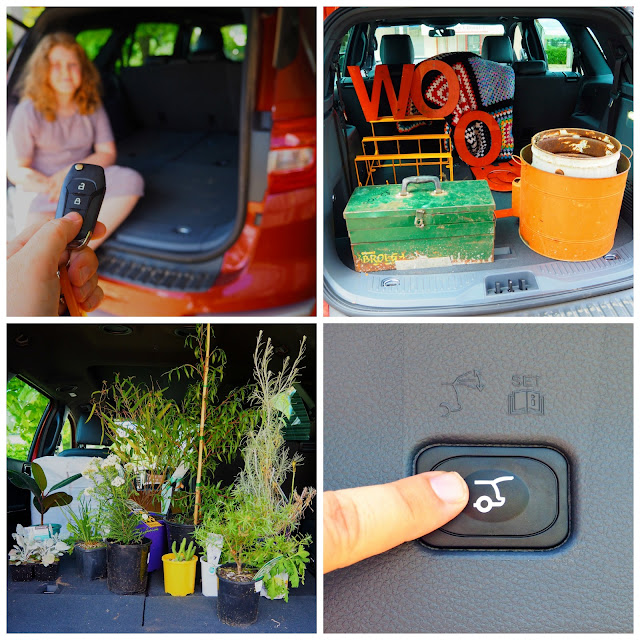 But it gets better. Seriously. You know all those moments of hard rubbish collecting (roadside kerbside treasure...) or when you go to a nursery and end up buying half a forest, or when you  buy enough food to feed an entire army of starving 15 year old boys, or when you spontaneously purchase a piece of furniture you found at your friends retro shop that-you-cannot-live-without(and it is supporting local business AND your friend)...

Well, Eve has a thing where her 3rd Row seats totally flatten out to become a HUGE stable surface AT THE TOUCH OF BUTTON! Apparently it is officially called the POWER FOLD SPLIT 3rd ROW SEAT. I call it fantastic. No more clambering and groping about the back end of the car trying to press nobs and pull forward seats and tearing a shoulder muscle doing it. Just press a button! Really, really awesome.

Now you may or may not know that my family recently returned from an adventure in New Zealand, and we spent a large amount of the trip in a motorhome. So I think that's why this idea came to her - last week I found Miss Rosie, carrying pillows and cushions outside. "Hello there my sweet Rosie Bear, watcha doing?" I asked casually (but actually a little perplexed). 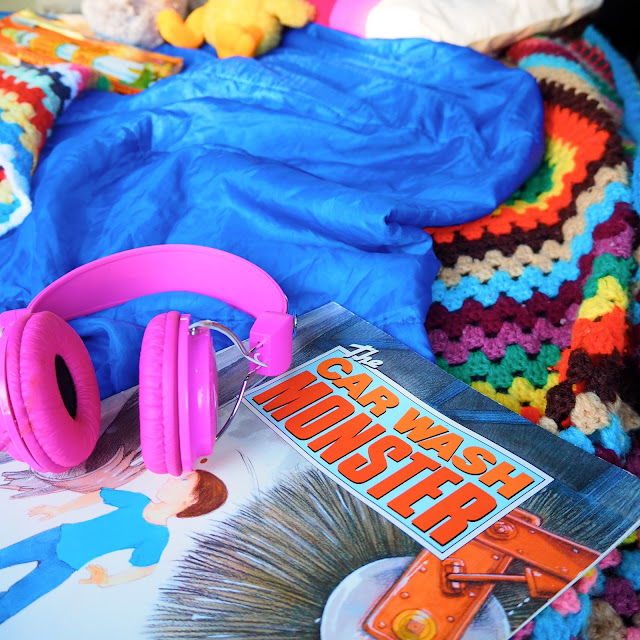 supplies for an EVE sleep out 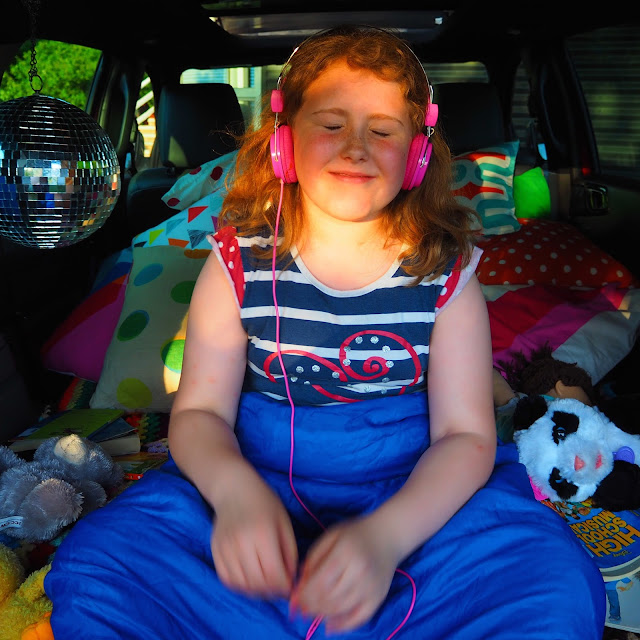 She had already worked out that there was a place to hold her cup, a place to recharge her devices (if needed) a reading light, and plenty of room. Enough for me to sleep with her if I wanted to in fact - even with tonnes of teddies in there. 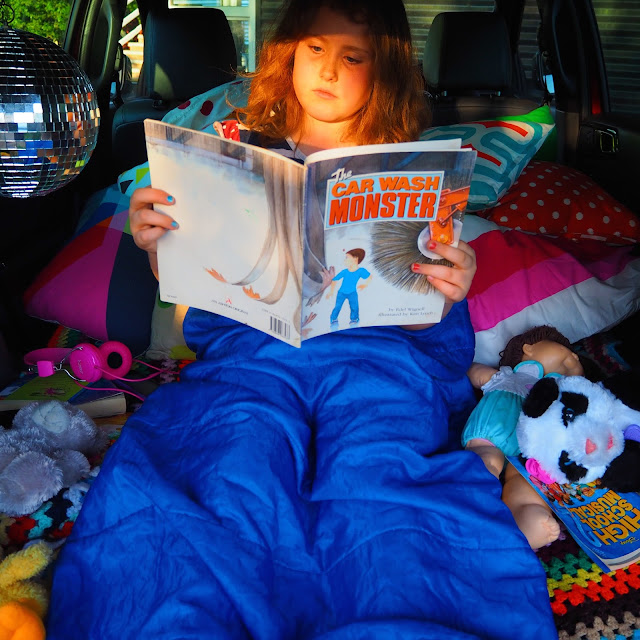 reading about a car wash

She had brought down her supplies already, including a stash of books, one of them being about a car wash (no doubt inspired by the last adventure we had in Eve, which I wrote about in my last blog). And what was she most excited about? Having almost 50% of the entire top of EVE as a panoramic sunroof, she was planning on opening it and spending the night gazing up at the stars. And for extra bedazzle, just in case the stars were not enough, my disco ball had been moved down to decorate the interior(!) 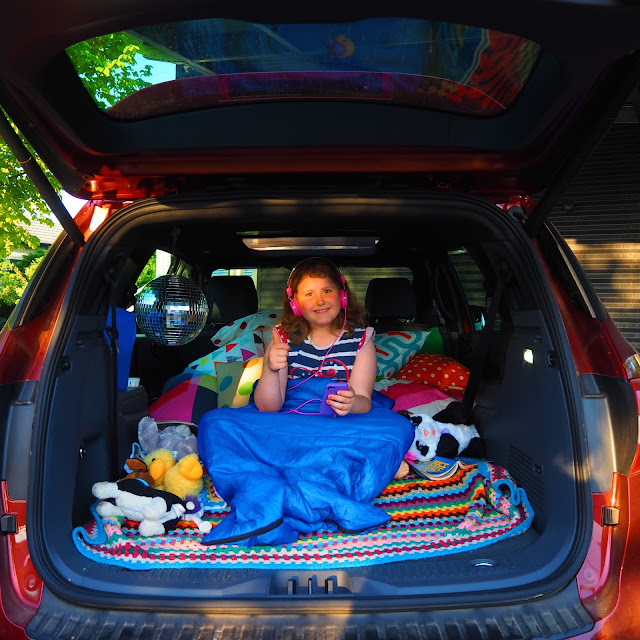 I have to admit, she looked pretty comfortable in there, totally chilled and onto a good thing.

So there you go, another unexpected good thing about those split seats. And Rose loving Eve even more because of it.

However, there is one improvement Rosie has suggested for the team at Ford. 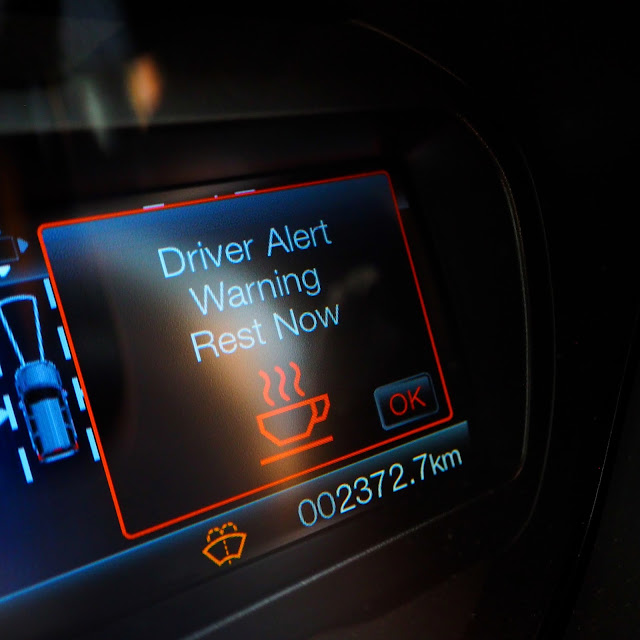 EVE telling me I need to stop for a cuppa

Although we all totally LOVE that Eve reminds us after 2 hours of driving that we need to have a rest, and uses a nice image of a cup of coffee to do it, after some discussion both Rosie and I feel that there should also be included in this graphic an image of a cake or biscuit to emphasise and encourage the need for a break. Just a little suggestion. But until then, we are happy to stop for a mere cappuccino or latte whenever EVE suggests it.

I did try to suggest to Rosie and my other 2 kids that the rest suggestion EVE gives us was a good reason to "SHUDDUP AND GO TO SLEEP!". It did not work. I had seen in the bumf about the New Everest a thing called ACTIVE NOISE CANCELLATION SYSTEM. This sounded brilliant, so I did go looking for how to activate it. 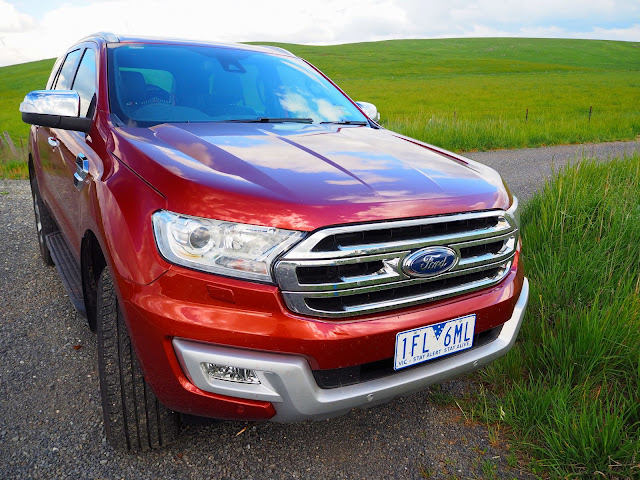 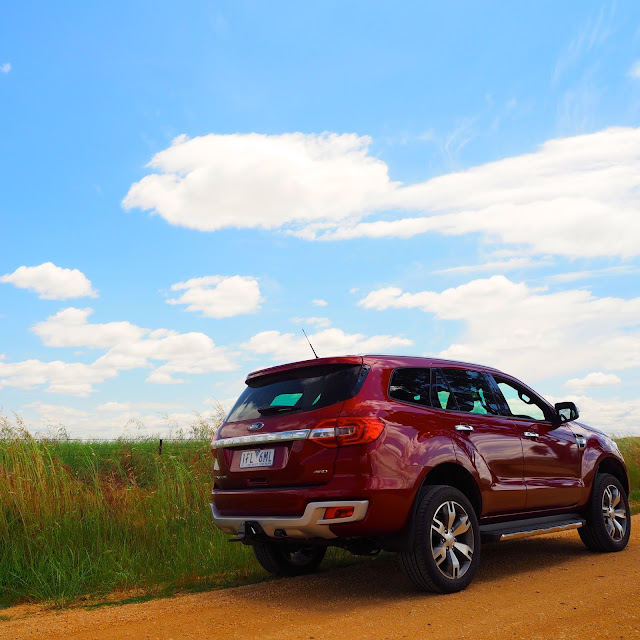 Look at her, isn't she lovely?!

Unfortunately, I misinterpreted it, and it does not make my kids go quiet. It does not cancel their active noise. Drats.

It turns out that in fact, and I quote, that this system "uses 3 highly sensitive microphones to detect and measure engine noise and then cancel it with opposing sound waves". Apparently it was inspired by noise cancelling headphones. How darn amazing!  Just one of the things that makes driving Eve such a pleasure. 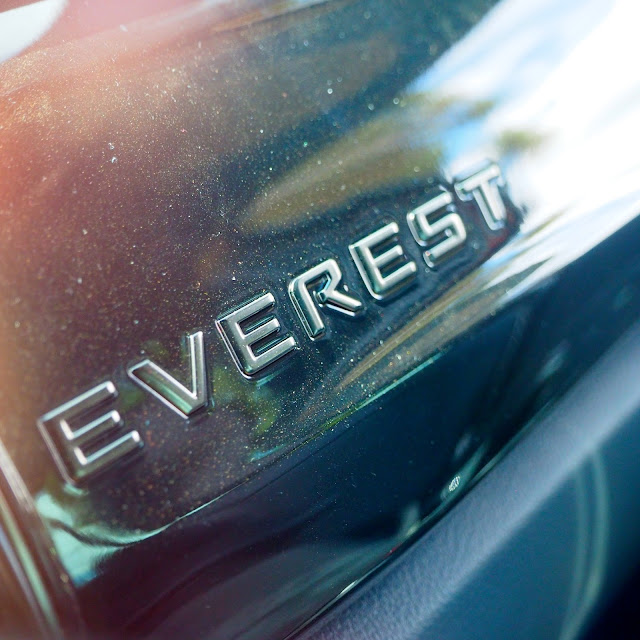 And it is. Quite aside from just the thrill of having the chance to drive her, I can honestly say that powering up hills (eat my dust all you other guys!) cornering through windy country corners, the leather seats, the ability to set my music, air temperature and phone to MY OWN SPECIFIC NEEDS, just with my voice with the SYNC2 is pretty bloody excellent. Driving her is really just a joy. 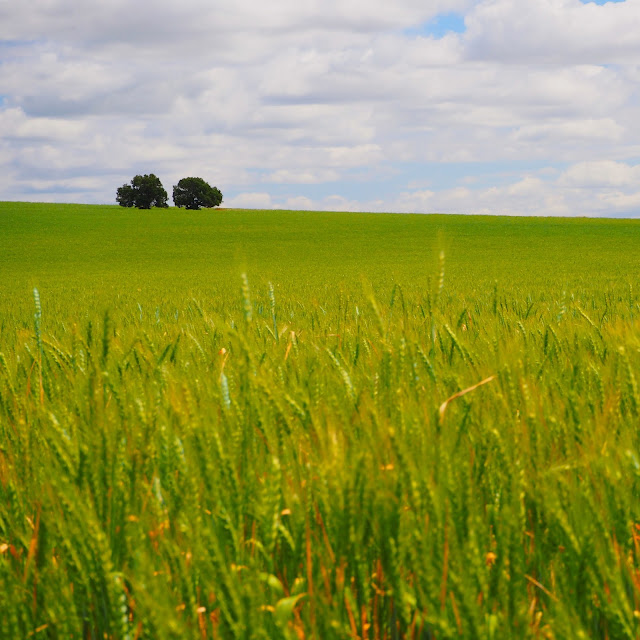 My fave two trees - I photograph them most seasons.

Having done a whole pile of painting recently, I have been a bit low on art supplies and needed to stock up. The nearest art supply place is over 100 km away, in Bathurst so it seemed a lovely drive in Eve was in order. I also know the countryside around here looks brilliant at the moment due to recent Spring rains, and this would be a great opportunity to snap off a few photos. And if I happen to sneak in a trip to a nursery or an op-shop... even better! 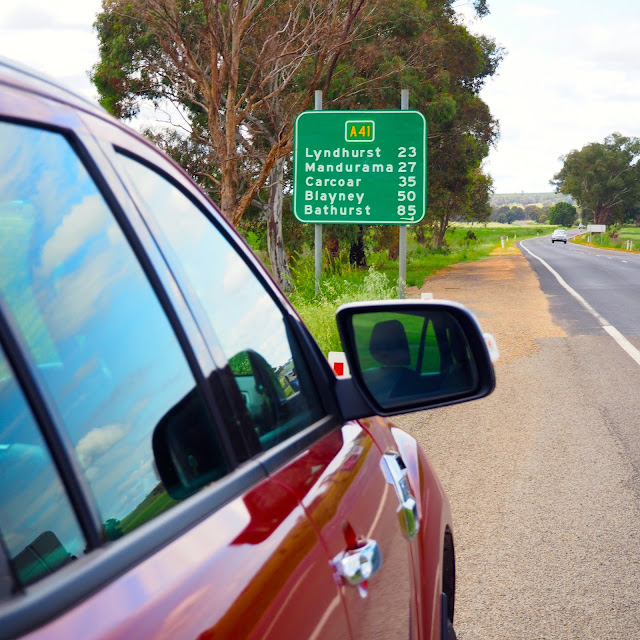 On the road to Bathurst 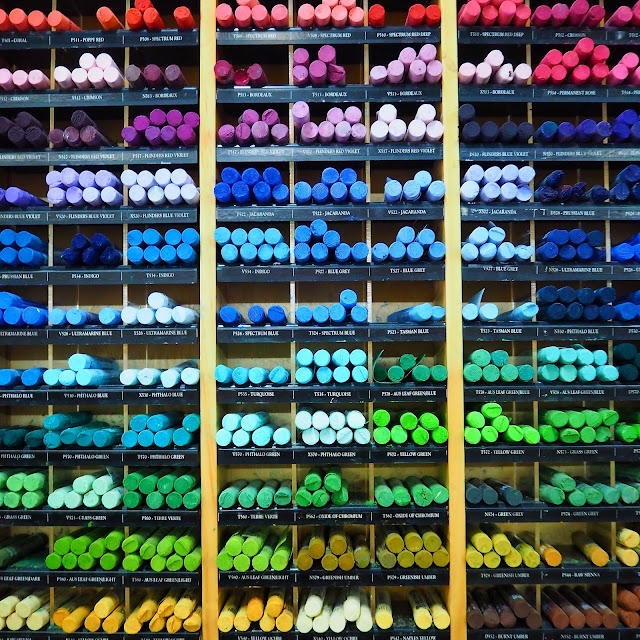 Lovely pastel sticks at the art shop in Bathurst

So that's what I did. All in the name of art. And to have some more EVE time. Because soon I will have to hand EVE back, so I am trying to get as much time in her as I can.

Maybe because I want something to remember EVE by, or more likely because my adventures with her have been so inspiring, I decided to use them as an idea for a little artwork. 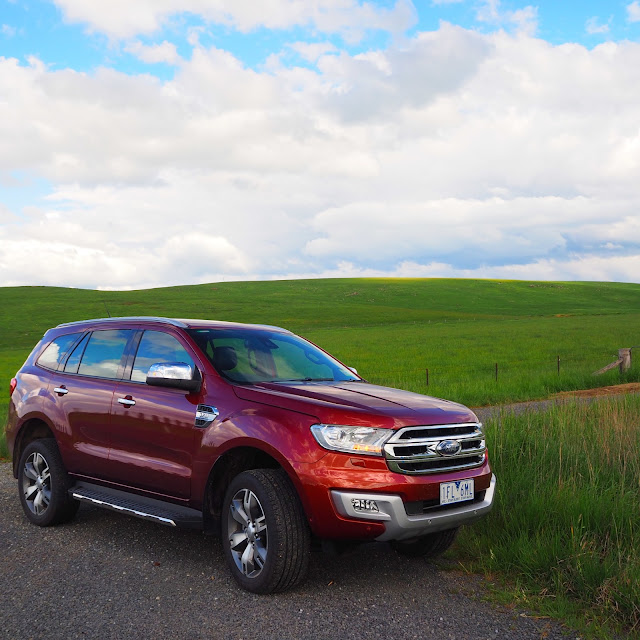 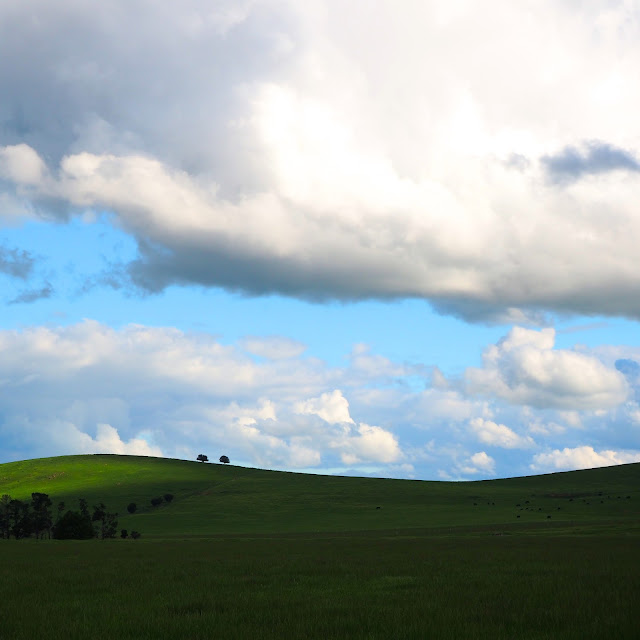 My other favourite two trees, near Blayney

It started as a collage picture of EVE and the things we had done... and then this grew into me wanting to make it into a stop frame animation. Never having done one before, and only discovering iMovie 2 weeks ago, I was a bit anxious about whether I would pull it off. But like all things in life, you don't know if you don't try. 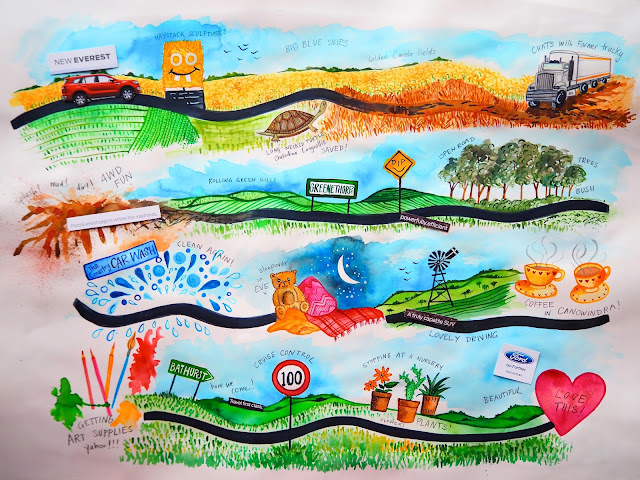 So here you go, I include here my first ever little animation, all about Eve and me. I'd love you to watch it! It is called THE EPIC and the EVERYDAY. And now you know why.

I hope you enjoy it as much as I have enjoyed being part of this challenge.

Thank you Ford Australia, and thank you Kidpsot for this great opportunity
It has truly been a blast. I have loved every minute. It has been EPIC! 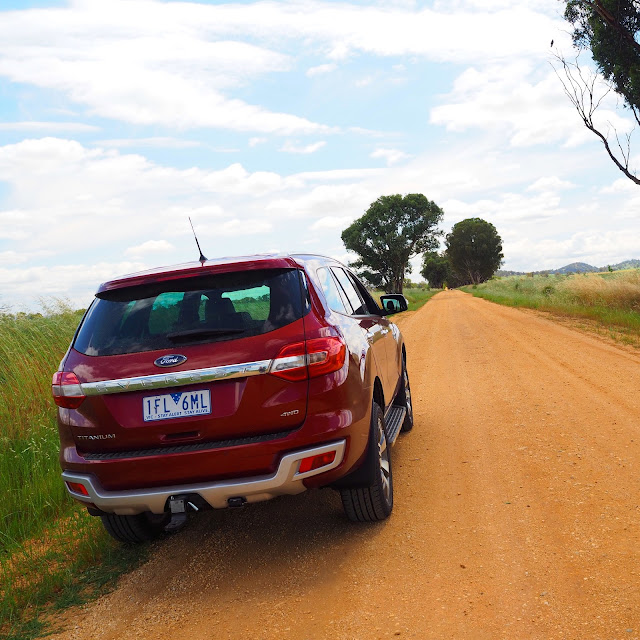 Looking down the track... wonder where it will take me?

OH LOOKY! It's my other two videos! Fancy that! 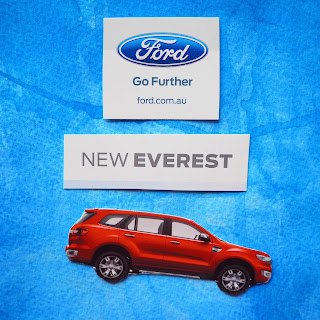 For those who were wondering...

This post written as part of my #FORDTHINKING #VOICESOF2015 Kidspot Challenge. As a Top3 Finalist in this prestigious challenge, I am being loaned a NEW FORD EVEREST for 6 weeks, as well as completing other blog challenges. I am supporting these posts with other social media platforms also - like Facebook, Instagram, Youtube Vimeo and Pinterest. I would  LOVE for you to look at what else I have done. It's been totally weird and totally fabulous!

at 02:49
Email ThisBlogThis!Share to TwitterShare to FacebookShare to Pinterest